Barotrauma of the Ear

Barotrauma of the Ear 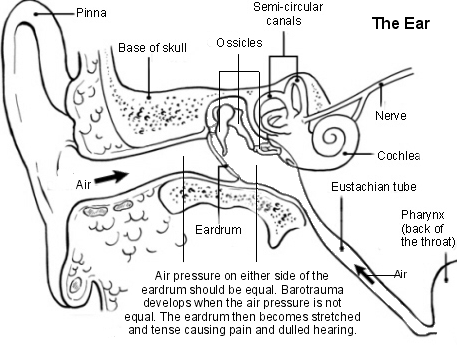 What is barotrauma of the ear?

It is where you have ear pain and dulled hearing because of unequal pressure that develops between the air in the middle ear and the air outside the ear. Barotrauma means damage to tissues caused by a difference in pressure between an air space inside the body. Barotrauma of the ear is the most common type of barotrauma.

What causes barotrauma of the ear?

The small space in the middle ear behind the eardrum should normally be filled with air. This air space is connected to the back of the nose by a tiny channel called the Eustachian tube. The air on either side of the eardrum should be at the same pressure for the eardrum to vibrate and function normally.

If the air pressure outside the ear quickly increases then this pushes the eardrum inwards which can be painful. The tensed eardrum also cannot vibrate as well as it should and so you may also have dulled hearing. To relieve the tensed eardrum, the pressure inside the middle ear has to rise quickly too. Air needs to travel up the Eustachian tube into the middle ear to equalise the pressure.

The most common example of barotrauma occurs to some air travellers. As a plane descends to land, the air pressure becomes higher nearer the ground. This pushes the eardrum inwards. If the pressure inside the middle ear is not equalised quickly, then you can get ear pain. Other situations where air pressure may quickly rise outside the ear is during scuba diving, diving to the bottom of a swimming pool, or rapidly descending in a lift (elevator).

Why are some people affected more than others?

The Eustachian tube is normally closed but opens from time to time when we swallow, yawn or chew. So, in most people, just normal swallowing and chewing allows air to flow up or down the Eustachian tube to quickly equalise the air pressure either side of the eardrum.

How can I prevent ear pain when I fly?

Ideally, anyone with a cold, respiratory infection, ear infection, etc, should not fly. However, not many people will cancel their holiday trips for this reason. The following may help people who develop ear pain when flying.

The above usually works for most people. However, if you are particularly prone to develop aeroplane ear, you may wish to also consider the following in addition to the tips above.

Normal practice of divers is to descend and ascend slowly which should give time for the air pressures to equalise either side of the eardrum. Divers can do the Valsalva manoeuvre (described above) too. You should not dive if you have a condition that may cause a blocked Eustachian tube as this may cause severe barotrauma and severe ear pain.

Are there any complications?

Ear pain can be severe, but in most cases no serious damage is done to the ear. Occasionally, the eardrum will perforate (tear). However, if this occurs, the eardrum is likely to heal by itself without any treatment within several weeks. See separate leaflet called 'Perforated Eardrum'.