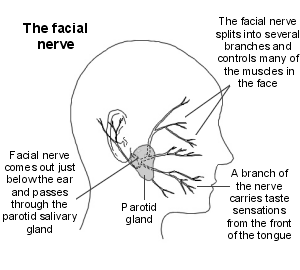 What is Bell's palsy?

Bell's palsy is a weakness (paralysis) that affects the muscles of the face. It is due to a problem with the facial nerve. The weakness usually affects one side of the face, but rarely both sides are affected. Many people who have a Bell's palsy at first think that they have had a stroke. This is not so. Bell's palsy is very different to a stroke and full recovery occurs in most cases. Bell's palsy is named after the doctor who first described it.

What is the facial nerve?

You have a facial nerve (also called the seventh cranial nerve) on each side of your face. Each facial nerve comes out from your brain, through a small tunnel in your skull just under your ear.

The nerve splits into many branches that supply the small muscles of the face that you use to smile, frown, etc. It also supplies the muscles that you use to close your eyelids.

Branches of the facial nerve also takes taste sensations from your tongue to your brain.

Who gets Bell's palsy?

Anyone can get Bell's palsy, and it affects both men and women equally. It most commonly occurs between the ages of 10 and 40. Bell's palsy is the most common cause of a sudden facial weakness. About 1 in 70 people have a Bell's palsy at some stage in their life.

The cause of the inflammation is not known, but it is probably due to a viral infection. There is some evidence that the cold sore virus (herpes simplex virus) or the chicken pox virus (varicella zoster virus) cause most cases of Bell's palsy. Most people have chickenpox at some stage (usually as a child) and many people have cold sores. The virus does not completely go after you have chickenpox or a cold sore. Some virus particles remain dormant (inactive) in the nerve roots. They do no harm there, and cause no symptoms. For reasons that are not clear, the virus may begin to multiply again (reactivate). This is often many months or years later. In some cases, the 're-activated' virus is thought to cause inflammation around the facial nerve to cause Bell's palsy.

What are the symptoms of Bell's palsy?

Does Bell's palsy affect the brain or other parts of the body?

No. Bells palsy is a local problem confined to the facial nerve and facial muscles. If you have other symptoms, such as weakness or numbness in other parts of your body, there will be another cause and you should tell your doctor.

Other conditions that may be confused with Bell's palsy

Bell's palsy is a common cause of a facial palsy. Less commonly, facial palsy is caused by other things that can damage or affect the facial nerve. For example: a head injury, sarcoidosis, Lyme disease, growths in the ear, tumours in the parotid gland, and tumours in the brain. Also, some people who have a stroke develop facial weakness.

With each of these conditions you are likely to have other symptoms too. This helps a doctor to tell the difference between a Bell's palsy and other causes of a facial palsy. For example:

In particular, Bell's palsy is uncommon in children under 10 years old. Other conditions should be carefully ruled out in children who develop facial weakness.

How does Bell's palsy progress?

Without treatment, full recovery is still likely and occurs in about 8 in 10 cases. With treatment, the chance of full recovery is improved (see below). In most people the function of the nerve gradually returns to normal. Symptoms usually start to improve after about 2-3 weeks, and have usually gone within two months. In some cases, it can take up to twelve months to fully recover.

In some cases, symptoms do not completely go. Some weakness may remain for good. However, it is often a slight weakness of part of the face and hardly noticeable. It is uncommon to have no improvement at all, but some people are left with some degree of permanent facial weakness.

When a doctor sees a patient with a sudden facial muscle weakness, he or she will aim to rule out other causes of the problem before diagnosing Bell's palsy. Most other causes can be ruled out by the absence of other symptoms, and a doctors examination. No tests may be needed. However, some tests are done in some situations. For example, in areas where Lyme disease is common (due to tick bites), then tests to rule out Lyme disease may be done. This is because a facial weakness is, rarely, the first indication of Lyme disease. Other tests may be advised if the diagnosis is not clear-cut.

What is the treatment for Bell's palsy?

A course of steroid tablets are usually prescribed for about 10 days. The steroid tablet most commonly used is called prednisolone. Steroids help to reduce inflammation.

Until recently, steroid treatment for Bell's palsy was controversial. However, a large research trial published in October 2007 showed that steroids are beneficial. Nearly 500 people with Bell's palsy were involved in the trial. Each person was assessed nine months after their Bell's palsy had started. Of those who did not take steroids, just over 8 in 10 (81.6%) had recovered facial function. Of those who took steroids, just over 9 in 10 (94.4%) had recovered facial function. No serious side-effects were reported from anyone who took the short course of steroids. Some other previous studies have also shown benefit from steroids.

So, in other words, you have about an 8 in 10 chance of recovery without steroid treatment, and about a 9 in 10 chance of recovery with steroid treatment. If steroids are advised, you should start them as soon as possible after the onset of symptoms. Ideally, within 72 hours of symptoms starting. They may not have much effect if they are taken after this.

As most cases of Bell's palsy are probably due to a viral infection, it seems logical that antiviral drugs may help. Some drugs can stop the chickenpox and cold sore virus from multiplying. However, there is debate as to whether antiviral drugs are useful.

The trial mentioned above also looked at an antiviral drug called aciclovir. The trail results showed that this drug had no effect on increasing the rate of recovery. However, another trial that looked at a different antiviral drug called valacyclovir seemed to show that it improved the rate of recovery if taken with steroids. Further trails are needed to clarify this. But in the meantime, whether to take valacyclovir or other antiviral drugs is debatable. It may be considered mainly in patients whose facial palsy is severe.

If you cannot close your eyelids fully, the front of your eye is at risk of becoming damaged. Also, your tear glands may not work properly for a while and your eye may become dry. Dryness could cause damage, so treatment is needed to keep the eye moist.

Therefore, you doctor may advise one or more of the following until the eyelids and tear production recovers.

If the facial weakness does not recover

For the small number of cases where the facial weakness does not recover fully, and remains unsightly, some techniques may be considered. For example:

Will it happen again?

In most cases, a Bell's palsy is a 'one-off'. About 1 in 10 people who have a Bell's palsy have a further episode sometime in the future, often several years afterwards.

Tel: 0870 44 45 460 Web: www.bellspalsy.org.uk
A registered charity that provides help and information to people with this condition.