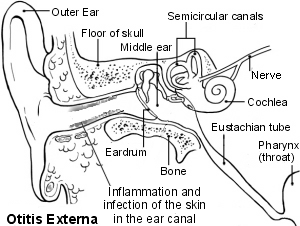 What is otitis externa?

Otitis externa is an inflammation of the ear canal which may be caused by infection, allergy, or other causes. Symptoms include itch, ear discharge, temporary dulled hearing, and pain.

Most bouts of otitis externa clear within a week or so with ear drops or sprays. These usually contain an antibiotic and a steroid. The antibiotic clears infection and the steroid reduces itch and inflammation.

However, in some cases the otitis externa becomes chronic (persistent) for several weeks or more.

Reasons why otitis externa may become chronic, and possible treatments

Sensitive ears
Some people seem prone to otitis externa. If you get water, shampoo, soap, hair spray, etc, in your ears it may cause irritation or itch. This may cause you to scratch or poke the ear. This can damage the skin in the ear canal and cause inflammation. Inflamed skin can quickly become infected. A vicious circle may then develop. The inflammation and infection cause more itch, you then scratch which makes things worse, etc.

So, despite treatment, the infection may continue if you continue to poke or scratch your ear. Therefore:

If you use cotton wool, replace it frequently with a fresh piece.

Ear drops
Sometimes otitis externa does not clear because ear drops are not used correctly. You have to put them in as often as prescribed to be fully effective. If the drops come out of the ear quickly, they may not work so well. When using drops:

Resistant bacteria
Some bacteria (germs) which infect the ear canal are resistant to some antibiotic ear drops. A change to a different type of ear drop may be advised if you have used the first one correctly, but there has been little improvement after a week or so.

Sometimes a swab (a small sample of the discharge) is taken and sent to the laboratory. This may help to identify which germ is causing the infection, and which antibiotic is best to use against this germ. If the infection is severe, antibiotic tablets may be needed in addition to drops.

Clearing the discharge may be advised
A doctor or nurse may clean the ear canal. They do this by using cotton wool on the end of a special stick which is gently pushed inside the ear canal to mop up any discharge or debris. Some GPs and nurses are trained to do this. Sometimes a referral to an ear specialist is needed. Sometimes gentle suction or syringing is used to remove discharge lying in the ear canal. You may need a regular clear-out of discharge every few days or so until the otitis externa has gone.

A wick may be advised if the ear canal is very swollen
A wick is a piece of gauze material which is soaked in antibiotic drops. It is gently placed in the ear canal by a doctor or nurse. The wick ensures that an antibiotic is always present and reaches to the inner part of the ear canal. A wick can be changed regularly.

Painkillers
Paracetamol or ibuprofen will usually ease any pain. Stronger painkillers are occassionally needed. If you hold a hot flannel against the ear it may also ease pain.

The above treatments will usually clear most cases of otitis externa. However, a doctor may consider a few other things if it still persists.

Allergy
Some people develop an allergy or sensitivity to ear drops that are used for otitis externa. The itch and discharge may then become worse rather than better. If this is suspected then a change to an ear drop low in allergy reactions may be advised. Sometimes a doctor will advise that you stop all ear drops which contain antibiotics. A steroid-only ear drop may be tried to reduce inflammation.

Referral to a specialist for skin patch testing is sometimes needed to find out what is causing the allergy. For example, the antibiotic, or a preservative in a particular ear drop.

Fungal infections in the ear canal are difficult to treat. It may take several weeks of anti-fungal ear drops and/or tablets to clear a fungal ear infection.

Middle ear infections
If the ear canal is full of discharge it may be difficult for a doctor to tell whether it is from the outer ear (otitis externa) or from a middle ear infection which has come through a burst eardrum. You may be referred to a specialist if the cause is not clear.

Referral to a specialist
This may be needed for such things as cleaning the ear canal of discharge, if a fungal infection is suspected, or for a more detailed examination of the ear.

Otitis externa has a tendency to recur. It is less likely to recur if you follow the advice given above in the section 'sensitive ears'. In short, try to keep the ear canal dry, and avoid soap or shampoo from getting in. The most important thing is to avoid scratching or poking the ear canal with fingers, towels, cotton wool buds, or anything else.