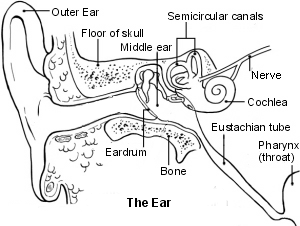 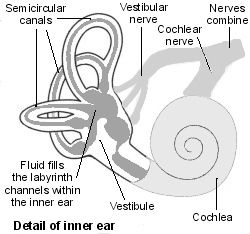 Dizziness is a word that is used to mean different things. For example, some people say that they are 'dizzy' when they have vertigo, or balance problems, or feeling faint, or feeling light-headed, or feeling weak, or feeling unsteady, or sometimes simply just when they feel confused or emotional.

There are various causes of dizziness. Some are common, some are rare. Some are minor problems, some are serious and even life threatening. As a general rule, if you feel dizzy regularly and you do not know why you are dizzy, it is best to see a doctor to get it checked out.

How do you normally keep our sense of steadiness and balance?

Your brain constantly receives nerve messages from various parts of the body to tell you where you are and what position you are in. The three main sources of these nerve messages are:

To be free of dizziness and to have good balance, it is best to have all of these - eyes, nerve signals from the skin muscles and joints, and inner ears - working normally. However, if you shut your eyes, you will still have a good sense of balance, and know the position of your head and other body parts because of the nerve messages that are sent to your brain from your inner ears, and other parts of your body.

What are the causes of dizziness?

There are many causes of dizziness. The main causes include the following.

Vertigo
Vertigo is dizziness with a spinning sensation. If you have vertigo you feel as if the world is spinning around you, and you feel very unsteady. Often you will also feel sick or vomit. Vertigo tends to be eased by lying down flat, and made worse by sitting up or moving around. Vertigo is usually caused by a problem in one of the inner ears when the labyrinth or vestibular nerve is inflamed, damaged, or not working properly. If the labyrinth or vestibular nerve sends too many, too few, or wrong messages to the brain, and conflicts with other messages from the other ear, eyes, or body, then the brain gets confused and results in vertigo.

There are various inner ear problems that can cause vertigo. These include the following:

Spinning around. Many people get vertigo for a short time if they spin around fast. For example, on some playground or fairground rides. Basically, the brain gets bombarded with nerve messages from the semicircular canals in the inner ears due to the constantly changing position of the head. The brain can't cope with the constantly changing nerve messages. Symptoms usually settle soon after the spinning stops, but in some people the symptoms can take several hours or longer to subside.

Labyrinthitis. This means inflammation of the labyrinth in the inner ear. There are various causes. The most common is due to a viral infection ('viral labyrinthitis'). Typically, with viral labyrinthitis you develop vertigo, and often feel sick or vomit. You may have some mild hearing loss on the affected side too. You may also have other symptoms of a virus infection such as a sore throat, flu symptoms, or a cold. The vertigo can be intense and you often need to stay in bed until the condition eases. Symptoms of viral labyrinthitis can last anything from a few days to several weeks, and then usually clear completely. If symptoms last longer, or other symptoms develop in addition, then there may be a more serious cause of the labyrinthitis. See separate leaflet called 'Labyrinthitis and Vestibular Neuritis' for more details.

Benign paroxysmal positional vertigo (BPPV). If you have BPPV you develop sudden episodes of vertigo that last just a few seconds or minutes. Each episode typically occurs when you move your head in a certain way. A common example is when you turn over in bed, or when you get up from bed in the morning. The vertigo is caused by a tiny fragment of solid material that has come loose inside the labyrinth. This then moves within the fluid inside the labyrinth when you move your head in a certain way and may stimulate the sensitive hairs inside the semicircular canal part of the labyrinth. This sends wrong messages to the brain about the position of your head resulting in vertigo. See separate leaflet called 'Benign Paroxysmal Positional Vertigo'.

Meniere's disease. This condition typically causes episodes of vertigo, hearing loss, and tinnitus (buzzing or ringing in your ear). The episodes can vary in severity, and in how often they occur. Each episode can last from 20 minutes to several hours. Permanent hearing loss and tinnitus may eventually develop. It is thought that Meniere's disease is due to a build up of fluid in the labyrinth from time to time. The build up of fluid may increase the pressure within the labyrinth and cause swelling of the labyrinth which leads to the symptoms. See separate leaflet called 'Meniere's Disease' for details.

Uncommon causes. Various conditions of the brain, blood vessels of the brain, and nerves can cause vertigo. For example, some people who have a stroke or multiple sclerosis develop vertigo. However, this will usually be in addition to various other symptoms.

Feeling faint
People who feel faint often say they feel 'light-headed' and feel as if they may collapse unless they sit or lie down. Most of us can remember times when we have felt like this. For example, when we have been ill with a fever, or when very hungry, or very emotional. However, some people have repeated episodes of feeling faint without an obvious explanation such as a fever. Causes include the following:

Orthostatic hypotension. This means your blood pressure drops when you sit up from lying, or when you stand up from sitting or lying. In particular, if you jump up out of bed after a nights sleep. The fall in blood pressure is just for a short time as the blood pressure quickly adjusts to your new posture. However, in some people the fainting feeling can be more severe and last for a few minutes. This problem tends to get more troublesome as you become older.

Anaemia. The main symptom of anaemia is tiredness. However, if you have anaemia you may not get sufficient oxygen to the brain. This can make you feel light-headed.

Arrhythmias and other heart problems. An arrhythmia is an abnormal heart rhythm when the heart may suddenly beat too fast, too slow, or in an abnormal way. There are various causes. One of the symptoms of an arrhythmia is to feel faint or light-headed as there may be a sudden decrease in blood supply to the brain as the arrhythmia develops. See separate leaflet called 'Abnormal Heart Rhythms (Arrhythmias)'. Various other heart disorders may cause a reduced flow of blood to the brain and cause you to feel faint or light-headed.

Anxiety. In particular, if you have anxiety with panic attacks you can feel light-headed. This can get worse if you over-breathe (hyperventilate) due to the anxiety or panic attack.

Medication. Feeling faint and/or light-headed is sometimes a side-effect of some drugs. It is always worth reading the information leaflet that comes in the drug packet to check if dizziness is a recognised side-effect.

Balance problems
Balance problems are those where you do not have vertigo, and are not light-headed or feel faint. However, you feel unsteady on your feet and feel as if you may fall over when you walk due to unsteadiness. This can be caused by various conditions. These include the following:

Ear problems. Some conditions of the inner ear can cause balance problems without the spinning sensation of vertigo.

Nerve disorders. Various disorders which cause the nerves in the legs to not work properly can cause unsteadiness. For example, peripheral neuropathy, multiple sclerosis, etc.

Brain disorders. Various problems in the brain such as a stroke, or a brain tumour can cause balance problems if the affected part of the brain is a part that helps to control posture and balance. There will usually be other symptoms too.

General frailty and/or being seriously ill with another illness. You will usually have other symptoms in addition to problems with balance.

Alcohol and drugs. You balance can be affected by drinking too much alcohol or taking some street drugs.

Do I need to see a doctor?

It is usually best to have an explanation for dizziness. If you have a prolonged episode of dizziness, or recurring episodes of dizziness and are not sure what is causing them, then it is best to see a doctor. In particular, if you have other symptoms in addition to the dizziness such as:

What is the treatment for dizziness?

The treatment depends on the cause. Your doctor will advise