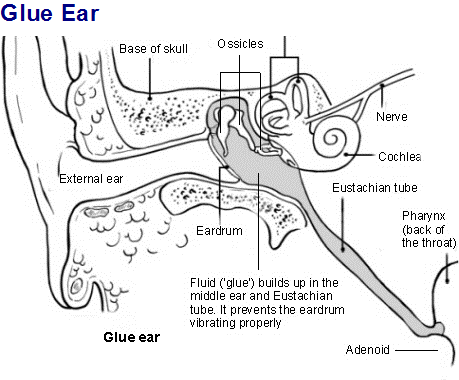 What is the ear like and how do we hear?

The middle ear behind the eardrum is normally filled with air. The middle ear is connected to the back of the nose by a thin channel, the Eustachian tube. This tube is normally closed. However, from time to time (usually when we swallow, chew or yawn), it opens to let air into the middle ear, and to drain any fluid out.

What is glue ear?

Glue ear means that the middle ear is filled with fluid that looks like glue. It can affect one or both ears. The fluid dampens the vibrations of the eardrum and ossicles made by the sound waves. The cochlea receives dampened vibrations, and so the 'volume' of the hearing is 'turned down'. Glue ear usually occurs in young children, but it can develop at any age.

Some children develop glue ear after a cough, cold, or ear infection when extra mucus is made. The mucus may build up in the middle ear and not drain well down the Eustachian tube. However, in many cases glue ear does not begin with an ear infection.

How common is glue ear?

It is common. More than 7 in 10 children have at least one episode of glue ear before they are four years old. In most cases it only lasts a short while. Boys are more commonly affected than girls. It is more common in children who:

What are the symptoms of glue ear?

This is the main problem. Hearing does not go completely and the hearing loss is often mild. However, the severity of hearing loss varies from case to case, and can vary from day to day in the same person. Hearing varies according to the thickness of the fluid and other factors. For example, it is often worse during colds. Older children may say if their hearing is dulled. However, dulled hearing in a younger child may not be noticed at first by parents or teachers, particularly if only one ear is affected. You may find that your child turns the TV or radio up loud, or often says 'what' or 'pardon' when you talk to them. Babies may appear less responsive to normal sounds.

This is not usually a main symptom, but mild earache may occur from time to time. Children and babies may pull at their ears if they have mild pain. However, the gluey fluid is a good food for bacteria (germs), and ear infections are more common in children with glue ear. This may then cause bad earache for the duration of an infection. Always have some painkiller in your home in case earache develops.

There has been concern that dulled hearing from glue ear may cause problems with speech and language development. This in turn was thought to perhaps lead to poor school achievement and behaviour problems. However, research studies that have looked at this issue are reassuring. The studies showed that, on average, children with glue ear had no more chance (or just a little more chance) of having long term behaviour problems or poor school performance compared to children without glue ear. However, these studies looked at the overall average picture. There is still a concern that the development of some children with glue ear may be affected. In particular, some children with untreated severe and persistent glue ear.

So, in short, developmental delay including speech and language is unlikely to occur in most children with glue ear. However, if you have any concern about your child's development, you should tell a doctor.

How does glue ear progress?

The outlook is usually good. Many children only have symptoms for a short time (a few weeks or so). The fluid often drains away gradually, air returns, and hearing then returns to normal.

Are any tests needed?

A referral to an ear, nose, and throat (ENT) specialist may be advised at some point. This may be straight away for babies who have hearing loss. (This is to rule out other serious causes of hearing loss.) It may be after a period of 'watchful waiting' in older children who previously had good hearing. Hearing tests and ear tests can confirm the cause of hearing loss and show how bad the hearing has become.

What is the treatment for glue ear?

No treatment is usually advised at first as the outlook is good. The length of time advised to 'wait and see' can vary, and depends on certain factors. For example, whether the glue ear is recurrent or new, the severity of the hearing loss, the child's age, etc. For a 'typical' situation, a doctor may advise that you wait several months to see if the glue ear clears.

For this treatment a special balloon is blown up by the child using their nose. This is called 'autoinflation'. It puts back-pressure into the nose, and may help to open up the Eustachian tube and allow better drainage of the fluid. The child needs to do this regularly until the fluid clears. The research studies that looked into this treatment found that it seems to help in some cases, but not all. Also, this balloon treatment requires a lot of commitment to do regularly. It is also difficult for young children to do properly. Therefore, with well motivated older children who can use the device, it may be worth a try. It is not thought to cause any side-effects or problems. You can get an autoinflation kit called Otovent on prescription, or you can buy it from pharmacies.

A small operation may be advised by an ear specialist if glue ear persists, or is severe. This involves making a tiny cut (about 2-3mm) in the eardrum under anaesthetic. The fluid is drained and a grommet (ventilation tube) is then usually inserted. A grommet is like a tiny pipe that is put across the eardrum. The grommet lets air to get into the middle ear. Hearing improves immediately.

Grommets normally fall out of the ear as the eardrum grows, usually after 6-12 months. By this time the glue ear has often gone away. The hole in the eardrum made for the grommet normally heals quickly when the grommet falls out. Sometimes grommets need to be put in on more than one occasion if glue ear recurs. (See a separate leaflet called 'Operations for Glue Ear'.)

Hearing aids is an option. The hearing aids would usually only be used for the time until the glue ear clears away.

What can I do for my child with glue ear?

The main thing is to be aware that your child will have dulled hearing until the condition goes away or is treated. The following are some tips.

Even after an episode of glue ear has cleared up, remember the problem may return for a while in the future, particularly after a cold or ear infection.

Does glue ear go away?

As children grow older, problems with glue ear usually go away. This is because the Eustachian tube widens, and the drainage of the middle ear improves. In general, the older the child, the less likely fluid will build up in the middle ear. Also, in older children, any fluid that does build up after a cold is likely to clear quickly. Glue ear rarely persists in children over the age of eight. In nearly all cases, once the fluid has gone, hearing returns to normal.

Some common questions about glue ear

Can glue ear be prevented?

The cause of glue ear is not fully understood, and there is no way of preventing most cases. However, the risk of developing glue ear is less in children who live in homes free of cigarette smoke, and who are breast fed.

Are children routinely checked for hearing?

Yes. All children should have a routine hearing test either shortly after birth or aged about 8-9 months. However, most cases of glue ear develop in children aged 2-5 years. Therefore, hearing may have been fine at the routine hearing test, but then become dulled at a latter time. See a doctor if you suspect your child has dulled hearing at any age.

Various medicines have been tried to help clear glue ear. For example, antihistamines, steroids, decongestants, antibiotics, and medicines to 'thin' mucus. However, research studies have shown that none of these medicines are much use in the treatment of glue ear.