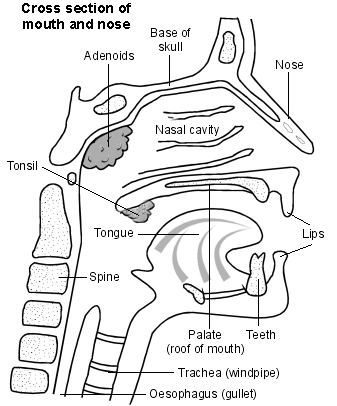 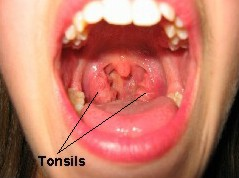 What are adenoids and tonsils?

Tonsils are made of soft glandular tissue and are part of the immune system. You have two tonsils, one on either side at the back of the mouth.

Tonsils vary in size from person to person.

A main function of tonsils is to trap bacteria and viruses (germs) which you may breathe in. Antibodies and immune cells in the tonsils help to kill germs and help to prevent throat and lung infections.

You can normally see your tonsils by opening your mouth wide and looking in a mirror. They are the two fleshy lumps that you can see at the sides and back of the mouth.

Adenoids are also made of glandular tissue and are part of the immune system. They hang from the upper part of the back of the nasal cavity.

Adenoids get bigger after you are born but usually stop growing between the ages of 3 and 7 years.

You cannot see your adenoids. If needed, a doctor can look at the adenoids either by using a light and a small mirror held at the back of the mouth, or by using a small flexible telescope. Occasionally, an x-ray is done to determine the size of the adenoids.

Like tonsils, adenoids help to defend the body from infection. They trap bacteria and viruses which you breathe in through your nose. They contain cells and antibodies of the immune system to help prevent throat and lung infections.

Although tonsils and adenoids may help to prevent infection, they are not considered to be very important. The body has other means of preventing infection and fighting off bacteria and viruses. In fact, the adenoids tend to shrink after early childhood, and by the teenage years they often almost disappear completely. Generally, you can have your tonsils and adenoids removed without increasing your risk of infection.

Some problems associated with tonsils

Tonsillitis is an infection of the tonsils. A sore throat is the common symptom. In addition, you may also have a cough, fever, headache, feel sick, feel tired, find swallowing painful, and have swollen neck glands. Pus may appear as white spots on the enlarged tonsils. Symptoms typically get worse over 2-3 days and then gradually go, usually within a week. Most cases of tonsillitis are caused by viruses, some are caused by bacteria. See separate leaflet called 'Tonsillitis' for more details.

Infectious mononucleosis is caused by a virus (the Epstein-Barr virus). It tends to cause a severe bout of tonsillitis in addition to other symptoms. See separate leaflet called 'Glandular Fever' for more details.

This is also known as 'peritonsillar abscess'. An abscess is a collection of pus. Quinsy is an uncommon condition where an abscess develops next to a tonsil due to a bacterial infection. It usually develops just on one side. It may follow a tonsillitis or develop without a preceding tonsillitis. The tonsil on the affected side may be swollen or look normal, but is pushed towards the midline as pus forms and the abscess next to the tonsil gets bigger and bigger. Quinsy is very painful and can make you feel very unwell. It is treated with antibiotics, but also the pus often needs to be drained with a small operation.

Do I need my tonsils taken out?

Some problems associated with adenoids

Swollen or enlarged adenoids are common in children. Causes include:

What are the symptoms of swollen, enlarged adenoids?

Swollen adenoids may not cause any symptoms or problems. However, symptoms may develop in some cases, especially if the adenoids become very large. Possible symptoms include the following:

What is the treatment for enlarged adenoids?

In most cases no treatment is needed. Often the symptoms are mild but may flare up during a cold or throat infection. Adenoids normally gradually shrink in later childhood and usually almost disappear by the teenage years. So symptoms tend to clear in time.

A note about removing the tonsils and / or adenoids

Several years ago, operations to remove tonsils and adenoids were very common. These operations are done less commonly these days as the benefits are not thought to be as 'clear cut' as they were once thought. Also, as with all operations, there is a risk involved with surgery.

For example, possible complications of surgery include infection and severe bleeding from the sites where the tonsils or adenoids were removed, and anaesthetic reactions. Also, after adenoids are removed, there is a small risk that speech may become 'nasal'. That is, a child may sound as if they are speaking through their nose. This is because after the adenoids are removed, the gap between the soft palate (the back part of the palate) and the roof of the mouth may not close properly as it should do when we talk. If this occurs, it may only be temporary. However, in a small number of cases speech therapy is needed, or even an operation to narrow the gap.

Therefore, before you or your child have an operation it is useful to discuss with the surgeon the benefits versus the risks of the operation.